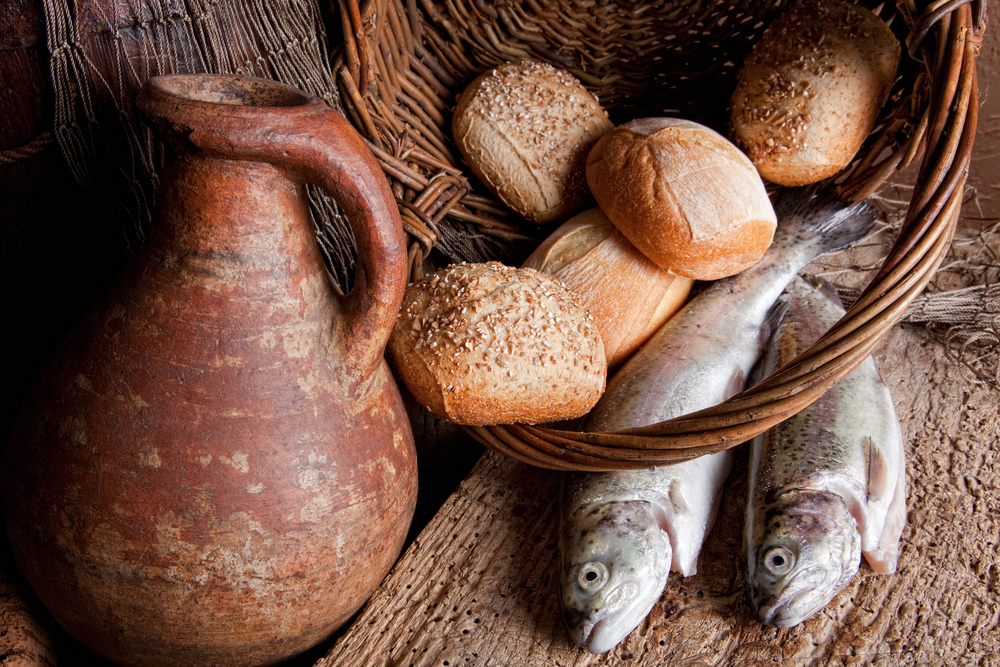 John 6:1 – After these things Jesus went over the sea of Galilee, which is the sea of Tiberias. Following the destruction of Jerusalem (A.D.70), the Sea of Galilee was renamed Tiberias, after Tiberias Caesar. About six months have elapsed between John Chapter 5:47 and this verse. Herod Antipas had killed John the Baptist and was seeking Jesus. The Jewish people called Tiberias, the Lake of Genessaret whereas the Romans called it Tiberias for their Emperor Tiberius.

John 6:2 – And a great multitude followed him because they saw his miracles which he did on them that were diseased. Many had experience seeing the miracles Jesus had performed on those who were diseased and the believed in Him and followed Him. Jesus’ miracles drew many after Him that was not effectually drawn to Him, like in today’s Christian culture. Many seek the presents of God and not His presence. Many want something from Him but don’t want to follow Him completely by submitting themselves to His Father’s written Word of instructions for the believer.

John 6:5 – When Jesus then lifted up his eyes and saw a great company [crowd] come unto him, he saith unto Philip. Whence shall we buy bread that these may eat? Jesus shows Himself pleased with their attendance and concerned for their welfare teaches believers to be concerned about one another. When we are among a multitude of people it would be wise of us to pray and ask direction from the Father who is among the crowd that is in need spiritually, healing in their bodies, peace in their mind so that we can pray for them and feed them the Word of God and the love of God. Jesus asks Philip where would they get food to feed such a multitude.  If anyone knew where to get food, it would have been Philip because he was from Bethsaida, a town about nine miles away.

John 6:6 – And this he said to prove [test] him: for he himself knew what he would. Jesus asked Philip where they could buy a great amount of bread. to feed the multitude. Jesus was testing Philip to strengthen his faith by asking for a human solution (knowing that there was none). Philip had been was of His first disciples, and he had seen all these miracles, and particularly that of His turning water into wine. Jesus highlighted the powerful and miraculous act he was about to perform.

John 6:7 – Philip answered him, Two hundred pennyworth [denari] of bread is not sufficient for them, that every one of them may take a little.  Philip’s reply to the question was they had two hundred pennyworths. Two hundred denarii would have been almost two-thirds of a year’s wages.  Philip starts assessing the probable cost. Jesus wanted to teach him that financial resources are not the most important ones. Although Philip had seen the miracles Jesus had performed, you would have thought he would have known that Jesus would supply the need they had need of.

John 6:10 – And Jesus said, Make the men sit down. Now there was much grass in the place, So the men sat down in number about five thousand.  Jesus instructs the disciples to inform the men to sit down, there was plenty of grass that made the place the more commodious for those that must sit on the ground and served as a cushion to them. Five thousand people were sitting to be fed. Wonder what was going through the disciple’s mind as well as those that were instructed to sit? Some in the crowd must have heard Jesus ask the question regarding where they should purchase bread and Andrew’s reply of what they had on the scene.

John 6:11 – And Jesus took the loaves; and when he had given thanks, he distributed to the disciples, and the disciples to them that were set down; and likewise of the fishes as much as they would [wanted]. Jesus looked at the loaves and gave thanks to God for the provision. He then distributes the bread and fish to the disciples and they gave to the people. The distribution was given in good portion as much as the people wanted. The miraculous multiplication of the food demonstrated Jesus’ deity because only God can create. This is the only miracle of Jesus that is recounted in all four Gospels.

John 6:13 – Therefore they gathered them together, and filled twelve baskets with the fragments of the five barley loaves, which remained over and above unto them that had eaten. The twelve baskets with fragments were evidence not only of the truth of the miracle that they were fed but of the greatness of it. They were not only filled, but there was all this over and above left over. Not only did Jesus supply the need, but He supplied it above and beyond what they needed.

John 6:14 – Then those men when they had seen the miracle that Jesus did, said, This is of a truth that prophet that [who is coming] should come into the world. When the men had seen and experienced the miracle; it influenced them Jesus was the prophet that was to come. Even the Jews with great assurance expected the Messiah to come into the world, and to be a great prophet. The Pharisees despised them as not knowing the law, but it should seem they knew more of Him that is the end of the law than the Pharisees did. The miracle Jesus performed clearly demonstrated that He was the Messiah promised, a teacher from God, the great prophet. There were many who were convinced He was that prophet that should come into the world who yet did not receive His doctrine. It is possible for men to acknowledge that Jesus Christ is that great prophet, the Son of God and yet turn a deaf ear to Him.