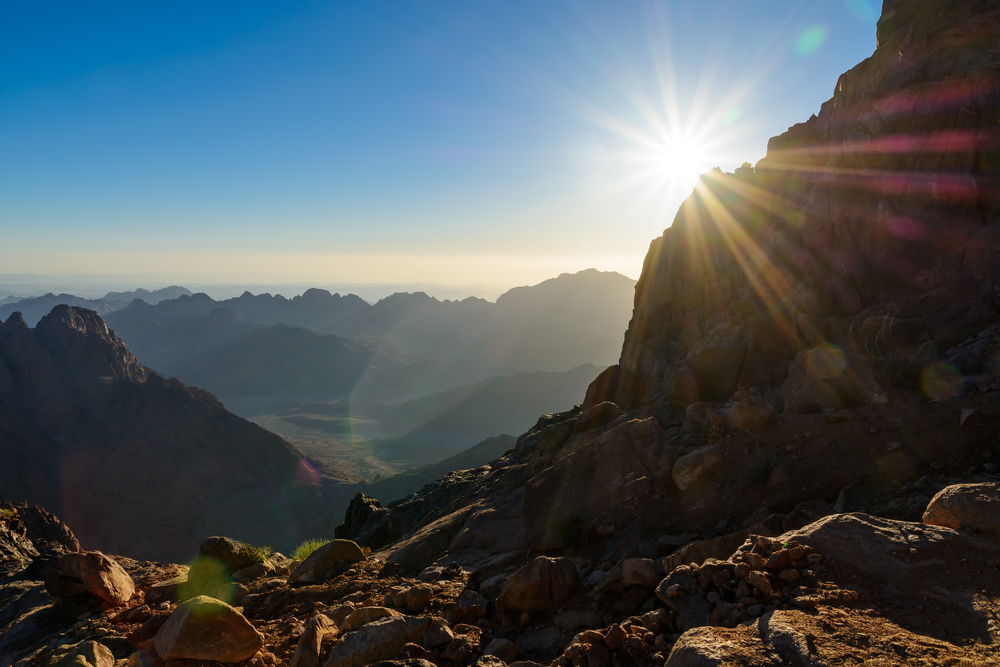 Golden Text:  “In all places where I record my name I will come unto thee and I will bless thee” (Exodus 20:24).

Moses led the people out of Egypt known as the Exodus. In the wilderness of Sinai, he received the Law directly from God.  Three months after the Israelites left Egypt they arrived at Mount Sinai and after they had camped for three days God was ready to establish His covenant with them. For the people to enter into a covenant with God, they needed to be sanctified, that is, set apart.  This would be accomplished by washing both their bodies and their clothing and refraining from certain activities. The people were to assemble at the foot of the mountain; restriction had already imposed concerning how close they were to get.  Breaching the instructions would result in death instantaneously.  During God’s entrance, a heavenly host blew the trumpet, the closer He came, the louder the trumpet blew. There were thundering and lightning and thick smoke. God reiterated to Moses to tell the people not come no further than the restrictions unless they die. God came from heaven to talk with His people and to make a covenant with them.

Exodus 20:18 – And all the people saw the thunderings, and the lightning, and the noise of the trumpet, and the mountain smoking: and when the people saw it, they removed, and stood afar off.  The people had been in the presence of God in a way most people never experienced and it was frightening. “Removed”, means to waver, stagger or shake.  Although God has not presented Himself in such of a way as He did with the Israelites if you ever been in the very presence of God, you will stagger and shake, and your whole being will be giving reverence to His holiness and majestic. The Israelites may not have understood the full significance of what was taking place before them, they knew enough to fear for their lives if God were to speak directly to them.

Exodus 20:22 – And the Lord said unto Moses, Thus thou shalt say unto the children of Israel, Ye have seen that I have talked with you from heaven.  God instructed Moses to tell the people that they had seen His presence, they had experienced God talking to them from heaven. They had no excuse not to follow the instructions He was going to give them. If they were to be His people they would have to follow the instructions.

Exodus 20:23 – Ye shall not make with me gods f silver, neither shall ye make unto you gods of gold.  God’s purpose in entering into a covenant with Israel was to show them what He wanted and to help them obey Him.  In keeping with the first and second commandments, gods of silver and gold were not to be made.  No physical image could ever represent an invisible God.  This regulation would help keep idolatry from creeping into their worship.

Exodus 20:24 – An altar of earth thou shalt make unto me, and shalt sacrifice thereon thy burnt offerings, and thy peace offerings, thy sheep, and thine oxen: in all places where I record my name I will come unto thee, and I will bless thee.  The Israelites were to build one altar, not many.  God’s repeated reference to the altar as one, not plural. The worship of God was to be centralized in one place where priestly supervision would not be lacking.  The altar was to be of natural materials, it was to be constructed of earth.  Stones could be used but they had to be unhewn and unadorned stones.  Men were made from the dust of the earth, a sacrifice offered to God placed on an altar made of earth possibly signified the sacrifice covering man’s sin.  As for stone,  idols were carved out of stone, and the altar of other nations was made of chiseled stones.  The simplicity of the altar was a call to holiness. The altar itself was left unadorned so as not to distract from the beauty of God’s holiness.

Exodus 20:25 – And if thou wilt make me an altar of stone, thou shalt not build it of hewn stone: for if thou lift up thy tool upon it, thou hast polluted it.  Any altar was to be constructed for worship was to remain simple. The prohibition against hewn stone was perhaps because of the tendency to make them into objects of worship rather than means of worship.  The condition that no tool could be used in shaping the stones in keeping with the assumption that the holiness of the natural object as destroyed by shaping it with a man-made tool.  Idols were carved out of stone, and the altars of other nations were made of chiseled stones.

Exodus 20:26 – Neither shalt thou go up by steps into mine altar that thy nakedness be not discovered thereon.  Unlike the pagan altars that were placed on the highest hill or had many steps leading up to the place of sacrifice, altars used by Israel were not to be constructed in such a manner as to expose the nakedness of the worshippers.  Fertility cults were very attractive; they combined religion with sensual pleasure.  The altar was not to have steps that would indecently expose the priests who ascended to the altar.