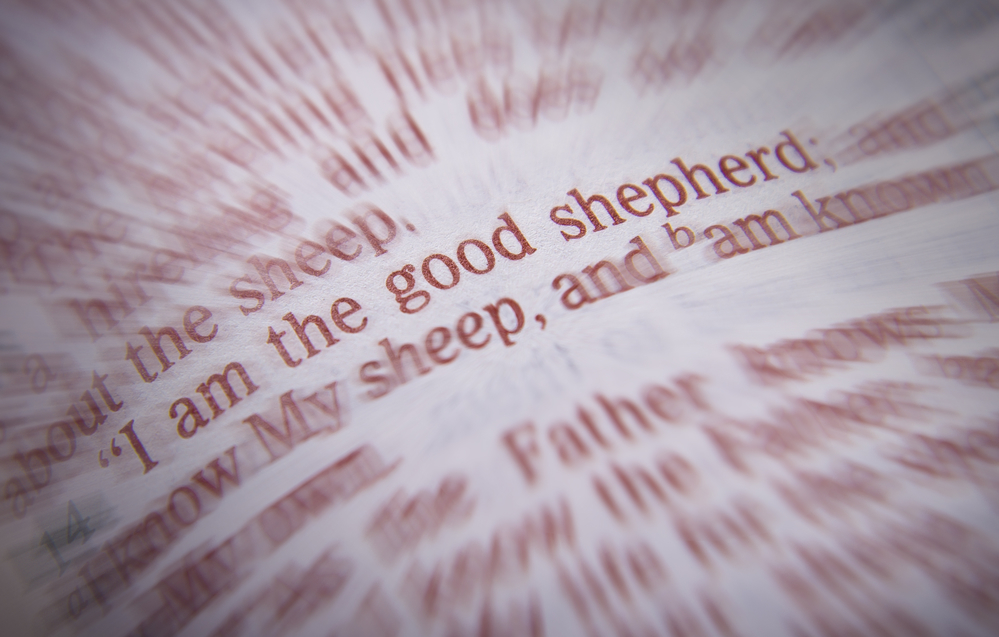 John 10:1 – Verily, verily,  I say unto you, He that entereth not by the door into the sheepfold, but climbeth up some other way, the same is a thief and robber.  A sheepfold was a walled enclosure or high fencer made with stakes and having one door or gate, often the enclosure was a cave. A shepherd usually enters through the front door,  a thief and a robber would enter the sheepfold any way other than the front. Sometimes two or three shepherd’s would have their sheep in the same sheepfold, and each sheep knew their shepherd’s voice. A thief or a robber knew they would have to bypass the doorkeeper so they would enter the sheepfold other than the front door. Spiritually speaking, a shepherd is one that has been ordained by God to lead the sheep, but there are many imposters who are shepherding and they are leading the sheep from God and from His protection. This is why it is so important for believers, professing Christians to read the Word of God for themselves to know whether or not they are being taught the Word of God.

John 10:3 – To him, the porter openeth and the sheep hear his voice: and he calleth his own sheep by name, and leadeth them out. Before the door is open, the porter sees or hear the shepherd’s voice and they open the door. Once the shepherd enters, he calls his sheep and they hear his voice and follow him. People are following people who are thieves and robbers and they wonder why they feel void. No joy or excitement about their salvation. Our spirit man has to be fed just like our physical bodies, if not, just like the bodies starve so does our spirit when it’s not being fed healthy spiritual food.

John 10:5 – And a stranger will they not follow, but will flee from him: for they know not the voice of strangers.  The sheep is familiar with the shepherd’s voice and they will follow him, but they will not follow a stranger’s voice. Jesus is our Shepherd, and we should know His voice, any other voices we hear other than our Shepherd, we shouldn’t be following. Jesus will never instruct us to do something that is opposite of God’s will or His instructions, neither will a good shepherd that has been called by God, he or she will live their lives according to the Word of God and will instruct the sheep to live according to the Word of God.

John 10:6 – This parable spake Jesus unto them: but they understood not what things they were which he spake unto them. They didn’t understand the parable or illustration Jesus was giving them about the shepherd. They normally had the Pharisees and Sadducees lording over them, they had no idea what a good shepherd would be like.  Because they were spiritually starved, they couldn’t understand the parable Jesus was giving them.

John 10:7 – Then said Jesus unto them again, Verily, verily I say unto you, I am the door of the sheep.  Jesus reiterates what He had formerly instructed them about the door that enters into the sheepfold. The shepherd enters through the front door, now He’s saying, He’s the door, in other words, no one enters to heaven but through Him, no one goes to the Father but through Him.

John 10:8 – All that ever came before me are thieves and robbers: but the sheep did not hear them. The thieves and robbers were the Pharisees. Jesus Christ is the door, in general, He is a door shut to keep out thieves and robbers and such as are not fit to be admitted.  Jesus is the door open to passage and communication.  By Jesus Christ, as the door, we have our first admission into the flock of God.  By Him, and faith in Him God comes to our church, visit it, and communicates Himself with it.  Many are calling themselves pastors and prophets and other ministerial offices, but God as not called or ordained them to minister.  They are in the ministry for the wrong reason, first they haven’t been called by God, secondly, they are in it for the money and not for the sheeps best interest.  If the Fruit of the Spirit and the Gifts of the Spirit is not being manifested through the pastor or over-seerer, you need to be praying to know whether or not you are in the right church.  It could be the pastor or overseer just need someone to continue to pray for them to get them in the spirit and it can also be, God did not commission them.

John 10:9 – I am the door: by me, if any man enter in, he shall be saved, and shall go in and out, and find pasture.  Jesus, the shepherd, gives spiritual life and access to spiritual food. Our spiritual food is hearing the Word of God, reading and studying the Word of God.  Just as we gain weight from natural food, we can also gain spiritual weight that will not only be a blessing to ourselves but to others.

John 10:10 – The thief cometh not, but for to steal, and kill, and to destroy: I am come that they might have life, and that they might have it more abundantly. The thieves take life, the shepherd gives it. Abundant life includes salvation, nourishment, healing and much more. Life here refers to eternal life, God’s life. It speaks not only of endlessness but the quality of life. With Christ, life on earth can reach much higher quality, and then in heaven, it will be completed and perfect.

← Light of the World
Hell →