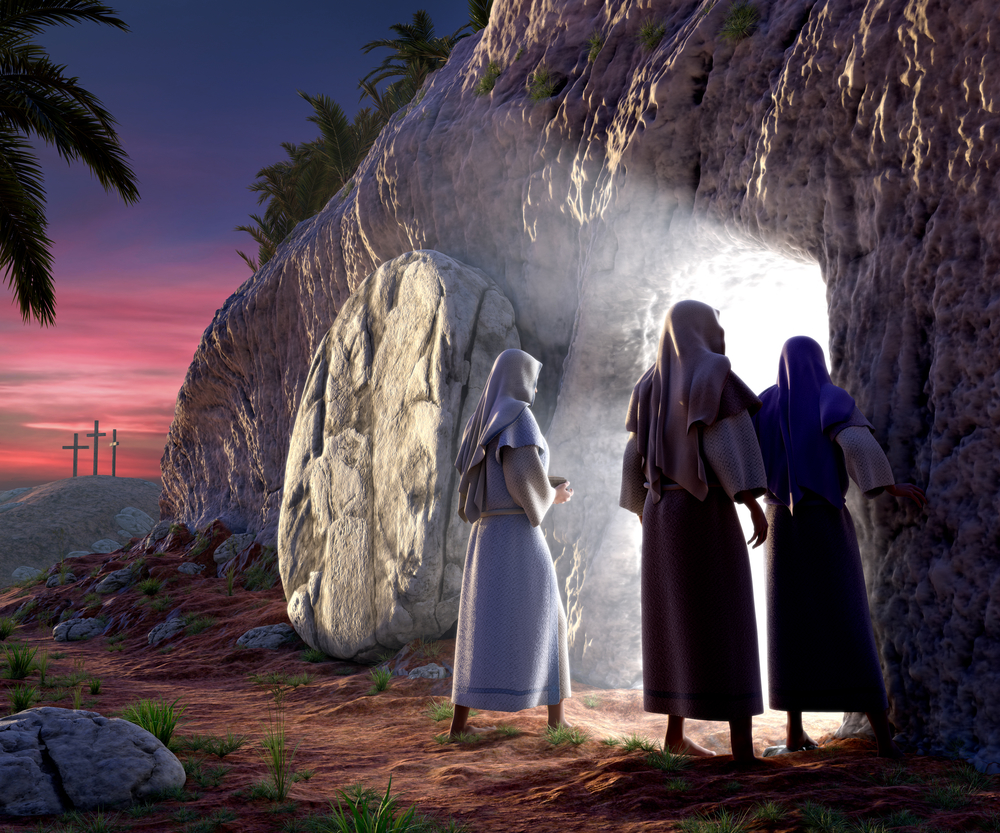 Golden Text:  “Jesus saith unto them, Come and dine. And none of the disciples’ durst ask him, Who art thou?  Knowing that it was the Lord (John 21:12).

Jesus had been crucified, His followers, Magdalene, Joanna and Mary the mother of James had returned home to prepare spices and ointments to finish preparing Jesus’ body for burial.  In keeping their devotion to the Lord and His commandments, they rested on the Sabbath Day.  After the Sabbath, they and other women went to the tomb only to find that Jesus wasn’t there. Having an encounter with an angel who informed them Jesus had risen like He had foretold them. Two of Jesus’ disciples had an encounter with the Risen Christ while they walked from Jerusalem to Emmaus, they invited Him to stay with them for a meal. At the meal as Jesus took bread, blessed it and gave to them, as soon as He gave them the bread they understood it was Jesus who had been talking with them while they were walking. In this lesson, we learn about Jesus’ appearance to others.  Peter, James, and John went fishing accompanied by other disciples. They stayed there until the night and didn’t catch one fish. In the morning when they reached the shore, Jesus was there unknown to them, asked if they had any meat. Their reply was no, He instructed them to cast their net on the right side of the ship and they would find fish.  Following His instructions, they caught a multitude of fish.  When they came to shore they saw fish lying on a bed of coals and bread. Jesus asked them to come and dine with Him, neither one of the disciples asked who He was for they all knew it was Jesus.

Lesson Outline:  I.  Gathering After Christ’ s Resurrection – John 21:1-3a

John 21:2 – There were together Simon Peter, and Thomas called Didymus, and Nathanael of Cana in Galilee, and the sons of Zebedee, and two other of his disciples. Despite the fact that the resurrected Jesus Christ had made several appearances to His followers, the disciples still had not fully come to grips with who Jesus really was and their special calling.  It had been three years since they had first met and agreed to follow Jesus of Nazareth. Christ chose to manifest Himself to them when they were together that they might be a joint witness of the same matter of fact.  Thomas was one of them and is named next to Peter as if he now kept closer to the meetings of the apostles than ever.  They all had met with a common cause waiting on Jesus as they had been instructed to do after His resurrection.

John 21:3a  – Simon Peter saith unto them I go fishing. They say unto him, We also go with thee.  As the seven men talked among themselves Peter decided he was going fishing and he told the other disciples, they too decided to go with Peter.  They did it to redeem the time and not be idle, rather than doing nothing they would go fishing. We too must redeem the time while we’re waiting for Jesus in order to not be idle, impatience or lose faith. Peter was always the outspoken one, he wanted to return to his life as a fisherman; he may have thought that the plan of Christ as he saw it had ended so he wanted to move on with his life. He was very much aware that Jesus had chosen him, but since Jesus’ crucifixion, would fishing be his destiny.  This is why the Bible instructs the Believer let us not be weary in well doing, for in due season we shall reap if we faint not.

John 21:3b – They went forth, and entered into a ship immediately, and that night they caught nothing.  As soon as they all agreed to go fishing they immediately went on the ship and spent the whole night fishing and caught nothing.  Providence so ordered it that all that night they should catch nothing that the miraculous draught of fishes in the morning might be the more acceptable with gratitude.

John 21:5 – Then Jesus saith unto them, Children, have ye any meat?  They answered him, No. “Children” was an affectionate greeting not a term of condescension. The question from the shore was probably regarded as a request to buy fish. The disciples answered that they had nothing to sell. The Lord knew they had not caught any fish; it seems He posed this question to point out their inability to accomplish anything on their own.

John 21:6 – And he said unto them, Cast the net on the right side of the ship, and ye shall find. They cast therefore and now they were not able to draw it for the multitude of fishes. They still hadn’t recognized Jesus, they assumed they were talking with a stranger. Out of the mist, the stranger instructed them to cast their net on the right side of the ship. Tolling all night, they probably were sleepy, tired, and was weary from not caught any fish, the stranger’s suggestion sound pretty good at this time. These were professional fishermen, they could have disregarded the stranger’s suggestion and would not have received anything.

John 21:7 – Therefore that disciple who Jesus loved saith unto Peter, It is the Lord. Now when Simon Peter heard that it was the Lord, he girt his fisher’s coat unto him, (for he was naked), and did cast himself into the sea. The disciple whom Jesus loved was John, who recognized that it was the Lord and He told Peter. The unusual instruction and the resultant catch of fish told John that it was the Lord who was giving them the instructions. Peter, was dressed for work, Jewish law required a person to be clothed for all religious acts. Because the law considered offering a greeting to be a religious act, the loincloth Peter wore for fishing was inadequate apparel for greeting. Peter quickly put on his outer garments and jumped into the sea to swim toward the shore.

John 21:8 – And the other disciples came in a little ship; (for they were not far from land, but as it were two hundred cubits), dragging the net with the fish. The rest of the disciples came in the ship that wasn’t far from the shore dragging the net of fish they had caught by being obedient to the instructions that were given to them who they thought was a stranger.

John 21:9 – As soon then as they were come to land, they saw a fire of coals there, and fish laid thereon, and bread. As soon as they reached shore they noticed a fire with coals and fish was cooking along with bread.  Jesus had already made a fire and started cooking.  Where did the fish and coal come from; had Jesus prepared a miracle as He did when He fed the five thousand?

John 21:10 – Jesus saith unto them, Bring of the fish which ye have now caught. Jesus told the disciples to bring more fish from their catch.

John 21:11 – Simon Peter went up, and drew the net to land full of great fishes, and hundred and fifty and three and for all there were so many, yet was not the net broken. Peter dragged a hundred and fifty-three fish to the shore without it being broke.

John 21:12 – Jesus saith unto them, Come and dine.  And none of the disciples durst ask him, Who art thou? Knowing that it was the Lord. Jesus invited the disciples to dine with Him, everyone knew who He was but no one asked the question, who art thou? He treated them as friends.

John 21:13 – Jesus then cometh, and taketh bread, and giveth them, and fish likewise. Jesus gave the meat to His guests, He not only provided it for them but he Himself divided it among them.

John 21:14 – This is now the third time that Jesus shewed himself to this disciples, after that he was risen from the dead. This was Jesus’ third appearance to the disciples as a group after His resurrection. In His appearance, Jesus was assuring them of His bodily resurrection and building their faith. He was no vision or apparition, He could be touched, He talked with them and dined.