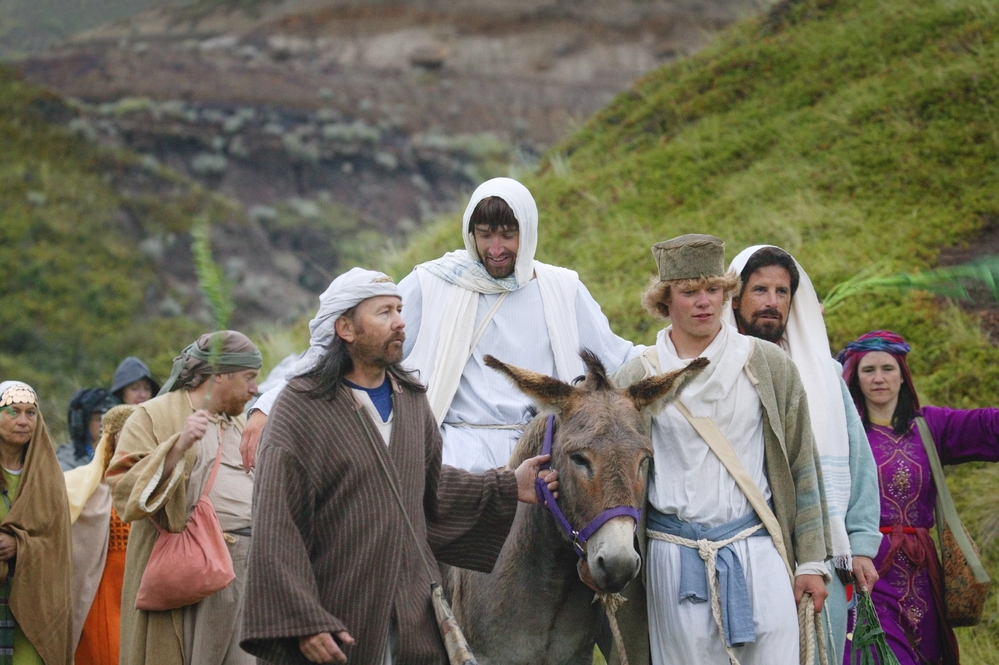 Bible Study is a key component for one to grow spiritually. Every Christian needs Bible Study corporately with other believers as well as personal time for Bible Study. Many professing Christians are living opposite of God’s written Word because they don’t attend Bible Study at their local church neither do they have personal time reading and studying the Word of God. God holds every professing Christian responsible for following His instructions. The Bible is instructions for the professing Christian to live by as well getting to know about the person who died for them.John 12:12 – On the next day much people were come to the feast when they heard that Jesus was coming to Jerusalem.  The following day after the dinner His friends had prepared for Him, many came to the feast; perhaps they had been Jesus’ hearers in the country and great admires of Him there and therefore came forward to testify their respect to Him at Jerusalem.  Perhaps they were those more devout Jews that came up to the feast sometime before to purify themselves and were more inclined to religion than the other Jews but it was those who came to honor Jesus. They were not the rulers, nor great men that went out to meet Jesus, but the common the people. Just as it was in the days of Jesus, it was the common people who came to see Jesus, so is it today. There aren’t many in the dictatorship that attend church and the few that attend don’t come with the expectation to have an encounter with Jesus, but religiously come without a relationship with Him.

John 12:13 – Took branches of palm trees, and went forth to meet him, and cried, Hosanna: Blessed is the King of Israel that cometh in the name of the Lord.  The people who were praising God for giving them a king had the wrong idea about Jesus.  They were sure He would be a national leader who would restore their nation to its former glory and therefore they were deaf to the words of their prophets and blind to Jesus’ real mission.  This was the Sunday before Jesus arose, today called Palm Sunday, until this point, Jesus had discouraged expressions of support from the people, here He allowed public enthusiasm. He entered Jerusalem on the back of a young donkey.  This act fulfilled prophecy (Rejoice greatly, O daughter of Zion; shout, O daughter of Jerusalem: behold, thy King cometh unto thee: he is just and having salvation; lowly, and riding upon an ass, and upon a colt the foal of an ass – Zechariah 9:9).  God spoke through the Prophet Zechariah to His people Israel that there will be King that will come and die for the sins of the world.  Jesus began His last week on earth by riding into Jerusalem on a donkey under a canopy of palm branches with crowds hailing Him as their king.

John 12:14 – And Jesus, when he had found a young ass, sat thereon: as it is written: When Jesus found a young donkey He sat upon it, the posture Jesus puts Himself into for receiving the respect that was paid Him. Jesus was also fulfilling the prophecy, not one word that was spoken would be dismissed.

John 12:15 – Fear not, daughter of Zion: Behold, thy King cometh, sitting on a ass colt. It was foretold that Zion’s king should come, sitting on a donkey. The daughter of Zion is therefore called upon to behold her king. In the prophecy, Zion is told to rejoice greatly and to shout, but here it is rendered “fear not”. Unbelieving fears are enemies to spiritual joy.

John 12:16 – These things understood not his disciples at the first: but when Jesus was glorified, then remembered they that these things were written of him and that they had done these things unto him. After Jesus’ resurrection, the disciples understood for the first time many of the prophecies that they had missed along the way.  Jesus words and actions took on a new meaning and made more sense. The disciples did not understand the prophetic significance of Jesus’ act “when Jesus was glorified”, after Jesus death, resurrection, and ascension, the disciples finally understood that the Old Testament prophecies concerning the Messiah had been fulfilled in Jesus. The disciples did not consider that they were performing the ceremony of the inauguration of Zion’s king. The disciples compared the prophecy to the event, then they remembered that these things were written of Him.

John 12:17 – The people, therefore, that was with him when he called Lazarus out of his grave and raised him from the dead, bare record. The reason what induced the people to pay this respect to Jesus it was because of the illustrious miracle He performed in raising Lazarus. They saw the miracle, and they saw who performed the miracle. They couldn’t deny what their eyes had witnessed as well as them seeing Lazarus sitting at the table with Jesus. They knew no other man bringing the dead back to life.

John 12:18 – For this cause, the people also met him, for that they heard that he had done this miracle.  Some out of curiosity were desirous to see One that had done such a wonderful work. Others, out of conscience, studied to do Him honor as the One sent from God.  The people flocked to Jesus because they had heard of His great miracle in raising Lazarus from the dead.  Their adoration was short-lived and their commitment shallow for in a few days they do nothing to stop His crucifixion. Devotion based only on curiosity, emotions, popularity fades quickly. Most likely news had spread through the little towns how Jesus had healed a man blind from birth, fed five thousand, healed an impotent man who had an infirmity for thirty-eight years, raises Lazarus from the dead; they probably were saying among themselves, this has to be the Messiah, the Son of God. Jesus didn’t broadcast His coming, news spread, and the people wanted to see the man who had performed all these miracles.

John 12:19 – The Pharisees, therefore, said among themselves, Perceive ye how ye prevail nothing? behold, the world is gone after him. The Pharisees tried everything they could to prevent the people from receiving Jesus, but through all what they had done and said, the people believed in Jesus and they were following Him. As Christians, when we truly live according to what we profess, God will intervene on your behalf. No weapon formed against you will not prosper, the truth will come out, you don’t have to fight, God will fight for you.

John 12:21 – The same came therefore to Philip, which was of Bethsaida of Galilee, and desired him, saying, Sir, we would see Jesus. The Greeks desired to be acquainted with Jesus so they went to Philip and made their request. They probably requested Philip because they saw him as a close follower of Jesus, Philip was one of Jesus’ disciples. The Greeks wanted to get to know this Jesus, they too had heard of the miracles He had performed. This indicates news had been spreading about Jesus, and this was another reason the Pharisees were so upset, jealousy and hatred had entered their hearts.

John 12:22 – Philip cometh and telleth Andrew: and again Andrew and Philip tell Jesus.  The Greeks went to Philip and Philip tells Andrew, and he, in turn, tells Jesus. Jesus must have been teaching since they were trying to get to Jesus.

John 12:23 – And Jesus answered them saying, the hour is come, that the Son of man should be glorified. A question must have been asked since the Scriptures states “Jesus answered them” by saying the hour has come. Prior to this, Jesus had stated that His hour had not come, now the time had come for Jesus to die and be raised from the dead.

John 12:24 – Verily, verily I say unto you, Except a corn of wheat fall into the ground and die, it abideth alone; but if it die, it bringeth forth much fruit. When a seed dies, it produces fruit, life comes by death. The principle is true not only in nature but it also true spiritually. Jesus was speaking first and foremost of Himself.  He is the grain of wheat. His death would produce much fruit and would result in many living for God. In order to produce good fruit one must be committed to the teaching of God’s Word.

John 12:25 – He that loveth his life, shall lose it; and he that hateth his life in this world shall keep it unto life eternal. The phrase “love his life” describes those who serve only themselves. In a short time, Jesus was going to give the disciples an opportunity to identify this problem in their lives. “Hates life”, involves serving Jesus, each professing Christian must establish his or her priorities. We can’t give ourselves fully to this life and yet be committed to the life the Word of God has given us instructions to live by. We must be committed to living for Jesus that we “hate” our lives by comparison. This does not mean that we long to die or are careless with the life God has given us but we see it being better to be in His presence than in the world. When one truly receives salvation he or she desires to be close to the Lord and the only way we can be close is to follow His instructions.

John 12:26 – If any man serve me, let him follow me; and where I am, there shall also my servant be: if any man serve me, him will my Father honor. “Follow me” in this context means to follow Jesus’ example of self-sacrifice. God does not want us to kill ourselves, but He wants us to be a living sacrifce, presenting our bodies holy and concentrated to Him. We can’t follow the worlds desires and actions and be followers of Jesus. This is why He has instructed the believers to separated from sinners, our lifestyles shouldn’t be like the ones that reject Jesus and the Word of God. Believers have to read and study the Word of God and then be submitted to its instructions.