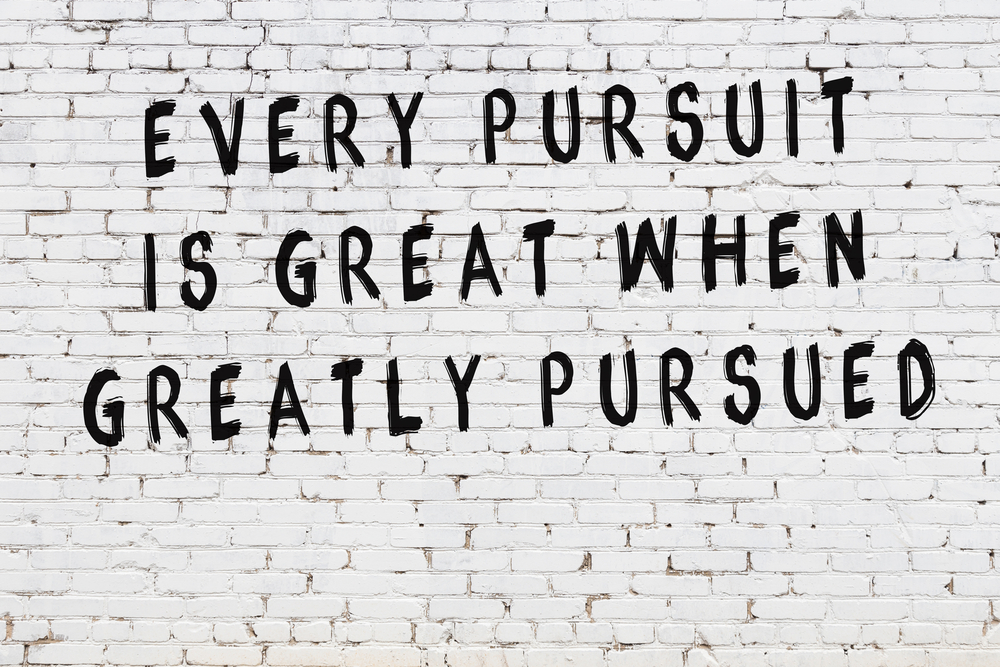 Pursuing God In Times of Trouble

But my servant Caleb, because he had another spirit with him, and hath followed me fully, him will I bring into the land were into he went; and his seed shall possess it – Numbers 14:24

Pursue is something we all have done at one time or another. We pursue a higher education, a career, a better quality of life, losing weight, gaining weight, looking younger as well as pursuing a spouse.

All these things we will pursue until we reach our goal. We don’t care how long it may take or how difficult the task may be. We will pursue until we have accomplished what we were after. That same tenacity we use to pursue natural things, we must also use to pursue the things of God. If we pursue God first, all the other things we’re seeking will be given to us. All the other tasks will be be much easier to accomplish when we place God first.

God’s written Word is unfolding for the coming of our Lord and Savior, but prior to His coming the world and the people in it will begin to go through many difficult situations and circumstances. Faith will be tested, dedication to God will be tested and tried as well as life issues bringing its issues and sorries and regrets. Many times as long as things are going well, some professing Christians will pray, fast, and read their Bible consistently, but when tribulations come to test their faith they will stop praying, fasting, and reading their Bible because they are so focused on what they are going through rather than focusing on the Word of God and faith in God.

Everyone will go through difficult times rather they are a believer or a non-believer. Non-believers call it life issues and circumstance, but believers are aware their faith is being tested through trials and tribulations. In our Christian walk there will be times when the enemy comes in like a flood, but the Bible has promised when the enemy comes in like a flood the Holy Spirit will lift up a standard for the believer. We don’t have to fear what the enemy will try to do as long as we’re in the Lord and the Lord is in us, the Spirit of God will defeat the plan and the schemes of Satan.

When difficult times arrive in our lives, that is not the time to stop following the principles of the Bible. Pray, fast, read your Bible. When you are being tested or attacked that’s when you bump up your prayers, your confessions, fasting, and reading the Word of God. You stand on the promises of God. Jesus defeated Satan with everything he would try to use to destroy you. It’s only a test, hold on to God, hold to His Word, fear God and not Satan. Don’t fear what you’re going through. Know that you are a conquer through Jesus. Before Satan can attack, he has to receive permission from God.

If he’s been given permission to attack you then God has given you the armor to fight. He has given you the power to stand strong in your faith. There will be times no matter what we have done as far reading as reading, the Word of God, fasting, praying, confessing that test is still there, the attack is still happening. That’s when God is molding and shaping you more in his image. He’s removing things in you that needs to be removed and placing it with more of His character and behavior, His faith. His love.

On this journey to heaven, we will go through many trials, tribulations, and attacks. Don’t think because you are Christian, you’re exempt from hurt, or having a need. We can’t go to higher heights, and deeper depths in the Spirit if every time a test, trial, or attack comes our way we back up from doing things we normally do spiritually. Pursing God is when we can still sing a song of praise when we’re in an attack, test, or trial. The praises are stronger, the commitment to God is stronger, faith is growing, and rather than running, you begin to pursue the enemy through prayer, fasting, and speaking God’s Word against the enemy and his attack.

God didn’t summons you in His army to fail. You’re soldier, you have been equipped. God has given you His Word; His Son and His Son’s name to use, and His Spirit to fight and to fight to win!

← When The Flesh Dies
Time →