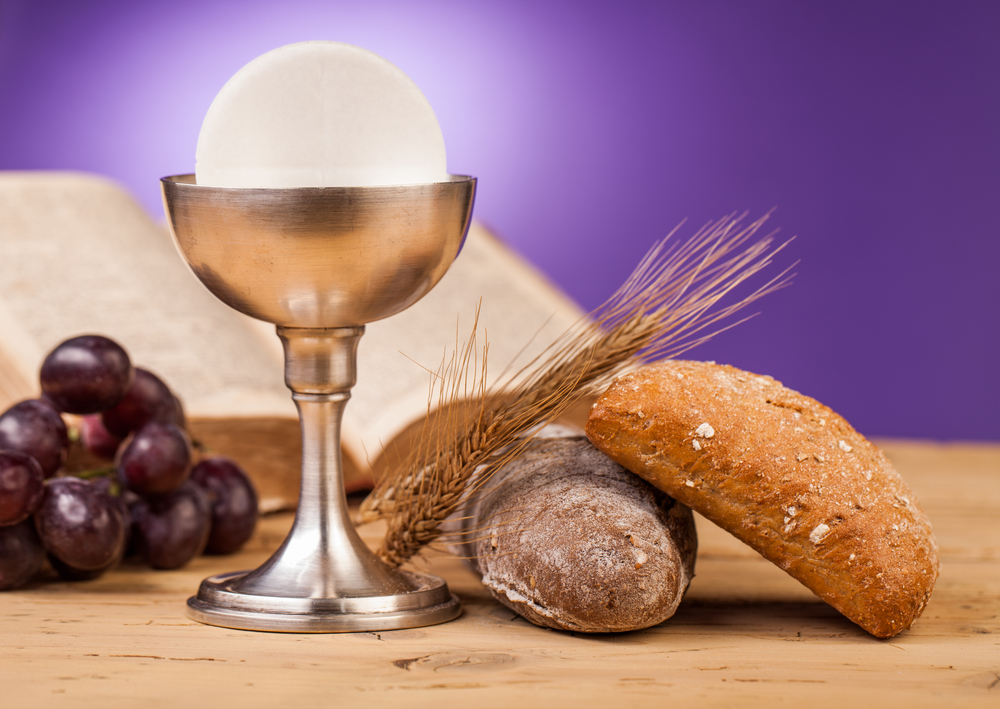 The Lord’s Supper was instituted by Jesus on the night of His betrayal.  On the first day of Unleavened Bread, as He and His disciples were eating the last Passover, Jesus announced that one of the twelve would betray Him.  He then blessed and broke the bread and said, “Take, eat, this is my body.”  Concerning the cup, He said, “Drink of it, all of you; for this is my blood of the covenant which is poured out for many for the forgiveness of sins.

In the Old Testament, Passover commemorated the deliverance of the children of Israel, God’s people, from Pharoah’s tyranny in Egypt.  In the Bible, Egypt is a type or symbol of sin. The Israelites’ deliverance required the blood of a lamb.  The Communion Table commemorates the Christian believer’s spiritual deliverance from the bondage of sin through the blood of the Lord Jesus Christ. The New Testament Passover was instituted when the Lord shared His last meal with His disciples before His crucifixion.  Jesus became the Sacrificial Lamb offered for mankind so that we could be delivered from Satan, which could be the Pharoah of this world.  Just as the children of Israel observe the Passover to celebrate their deliverance from slavery in Egypt, Christians observe Communion to celebrate deliverance from sin and its consequences; Communion is our Passover!

Taking Communion shouldn’t be taken as something without meaning; it should be reverenced and appreciated. This is why the Pastor prays for the congregants before taking Communion. As believers, we should examine ourselves to see where we may have sinned against God’s Word or transgressed against a fellow believer.  Communion is often taken where the person is a practicing sinner while others have unforgiveness and offenses in their heart and emotions.

Before one takes Communion, they should confess their sins to God and ask for forgiveness. You can’t repent before you confess. Confessing our sins restores the relationship between us and God.  When we find an area where we have sinned against God’s Word, we should confess and repent, meaning we will not continue in the sin. We shouldn’t be asking for forgiveness for the same sin each time we take Communion.  Repent means regret or sorrow for sinning against God; it’s a turning away from sin after asking for forgiveness.

If unforgiveness is in our hearts, we need to ask God to help us to forgive the person or persons with who we have unforgiveness. If there’s an offense, we need to check ourselves to see why the offense is still there and then release the person who has offended us. Communion is sacred; it shouldn’t be taken lightly.  When we come together as a body of believers, and there is disunity, envy, strife, and other ungodly actions in the camp, and we’re taking Communion, it is not discerning the Lord’s body, and it’s causing many to be weak, sickly and some die. Only the person and God know what’s in a person’s heart or spirit; prayer should always occur before taking Communion by the Pastor and the individual.

The Bible indicates those who partake of Communion unworthily bring about damnation to themselves; the Bible is speaking and talking about Christians. Unconfessed sin is partaking of the Communion of unworthily, not respecting what the Lord did for them. Before Jesus died, He asked the Father to forgive those who tortured and killed Him; if Jesus can forgive, what about us? No one has ever been through what our Lord and Savior went through.

Pastors should always pray for the congregants before taking Communion; time should be given so that people can search their hearts. Those practicing sin willingly and knowingly should not be given Communion because they don’t appreciate what the Lord has done for them to be delivered from the bondage of sin. They’re taking the Communion as something they are doing without any thought of what occurred for them. It should even be announced by the Pastor to warn them that are practicing sin what will happen to them taking the Communion unworthily.

Last but not least, Communion can be taken individually, and it does not have to be taken on a certain day of the week. The Bible states, ” For as often as ye eat this bread and drink this cup, ye do show the Lord’s death till He comes.” Christians who have submitted themselves completely to God and His Word should take Communion as often as possible, representing their gratitude and appreciation for what the Lord has done for them. They’re not doing it religiously but worshiping and praising God in spirit and in truth for what the Lord accomplished by His death and resurrection!