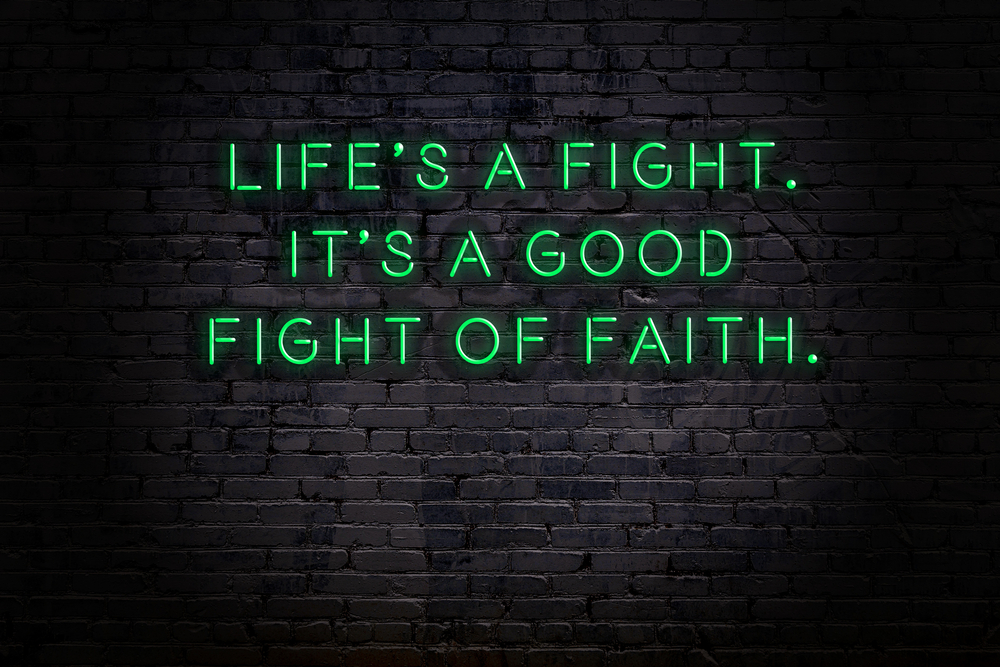 Fighting the Good Fight of Faith

The good fight concerns the daily struggle with sin in the Christian life and the hardships and adversities in the ministry. Your ministry may not be behind a pulpit, but your daily living showcases what a true Christian is about.

Spiritual maturity is like growing into an adult in the natural. When one first becomes a Christian, they are in the infant stage. As they continue to feed their faith by prayer, fasting, reading, and studying God’s Word accompanied by attending worship service at a local church, they will begin the stage of the infant to one that can stand alone without having to have someone always praying for them or encouraging them, they will be mature enough to pray and encourage themselves.

There is nothing wrong with someone praying for you and with you; every Christian needs that at one time or another. The problem is when Christians never pray for themselves but rely on someone else to pray for them.

Whether you’re a Christian or non-Christian, life will bring issues and problems. Every Christian is on a spiritual journey, and they will encounter giants on this journey, just like the children of Israel when they were journeying to the promised land. God promised to give them a land flowing with milk and honey, meaning the ground would be fertile, and their stock would have plenty of food for grazing. Vegetables and fruit were plenteous. Although God was giving them a land of plenty, they had to fight giants to get into the promised land.

Every Christian is on a spiritual journey; we, too, have to fight giants. Jesus has paid the price, but each Christian will have to fight the giants in their life to enter the promised land. Giants of fear, anxiety, pain, and suffering, whatever giant that has been assigned to them, they will have to defeat it by faith in what Jesus has done for them and the spiritual empowerment He has given them to fight.

Christians fight by prayer, fasting, and speaking the Word of God over the circumstances. You will lose the battle if you don’t have a life submitted to God or His Word. Jesus is praying for you, but you also have to pray. Many Christians have been blindsided, thinking they don’t have to pray, fast, read and study God’s Word, and adhere to the instructions. Too many Christians don’t believe they are fighting a spiritual enemy, one they can’t see with their natural eyes.

Satan and his cohost are fallen angels that rebelled against God. Satan nor his cohost were stripped from their power when they were cast out of heaven. They have power, but the power that dwells in every born-again Christian is more powerful when they have the Spirit of the Living God living within their being. Christians don’t fear demonic spirits or go on their territory unless God prompts them.

Sometimes Christians are attacked with sickness, disease, and infirmities; sometimes, it’s because of challenges in their health, and sometimes it’s from demonic attacks. If it’s from a demonic attack, you have been given the power to overcome (Behold, I give unto you power to tread on serpents and scorpions, and over all the power of the enemy, and nothing shall by any means hurt you – Luke 10:19). If its a physical or health challenge pray to the Father for your healing and believe God for your healing.

Everyone will not be healed but can enter heaven when they adhere to God’s Word. It’s not Scriptural that everyone will be healed. No one knows why God heals some and not others, but they have been promised that if they live according to God’s Word, they are children of God and will enter heaven to live with Him for eternity.

There have not been nor will there be giants in the Christian’s life that can’t be defeated. Sometimes God takes His children home, and some may lose faith because they believed God for the healing of their loved ones. If the person isn’t healed, they haven’t lost the battle; they are gone to be with the Father (The righteous perisheth, and no man layeth it to heart, and merciful men are taken away, none considering that the righteous is taken away from the evil to come – Isaiah 57:1). The person wasn’t defeated they are in a better place.

Whether you’re a Christian or a non-believer, life will bring challenges and Satan attacks. God will hear the prayer of His child and send help, but the non-believer and the hypocrite prayers are abominations to God (He that turneth away his ear from hearing the law, even his prayer shall be abomination – Proverbs 28:9). The Word of God is His law, the definition of the law is all the rules of conducting established by the authority or custom of a nation, God has authority, and He has given His written Word for Christians to live by.

If you want your prayers to be heard and answered, adhere to God’s Word, fight the enemy with God’s Word, and believe God’s Word! Don’t give up, don’t feel defeated; you have God and heavens angels fighting for you as you fight the good fight of faith.